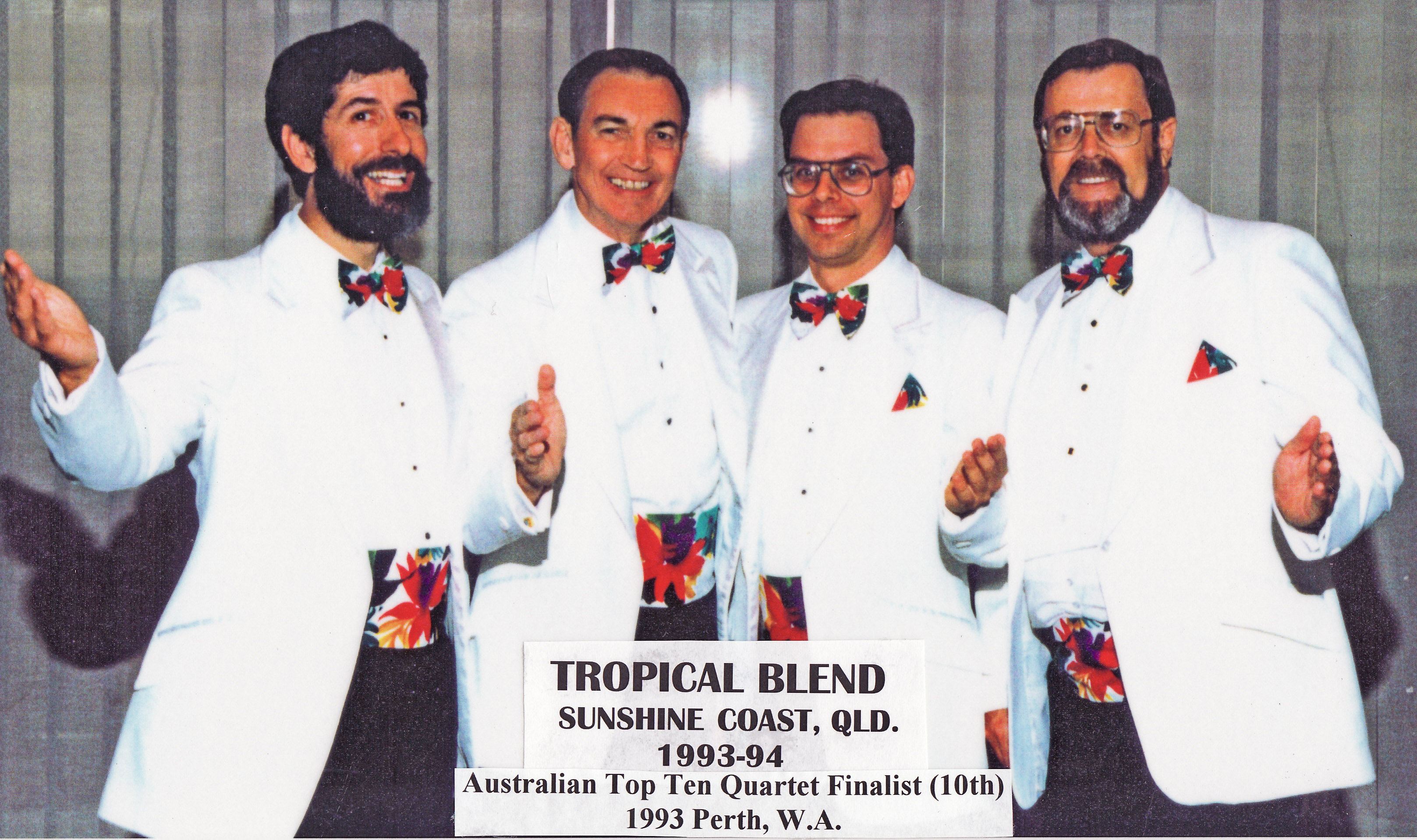 In July 1990, at the International Barbershop Convention/Competition held in San Francisco, a mutual barbershop friend, Linc Abbott, introduced Dr Melvin McMichael to Mike Ivess. The two were very experienced barbershop singers; Dr McMichael sang for years in the GOLD COAST CHORUS and a quartet in San Luis Obispo, California and Mike Ivess sang in a New Zealand chorus and quartet. As it developed both were living in Buderim some 10 minutes from each other.

When they returned from San Francisco they decided to form the first barbershop quartet here on the Sunshine Coast. They arranged for a photographer from the local Sunshine Coast newspaper to take a picture of them in a barbershop in Mooloolaba. The newspaper then ran this picture together with a story inviting men interested in becoming part of a barbershop quartet to join them at Mike’s home on October 10, 1990. Mike sang tenor and Mell sang lead so they were seeking a baritone and a bass to complete this new quartet. A total of 14 men turned up for the audition session and after several hours of auditions the TROPICAL BLEND Barbershop Quartet was formed.

The TROPICAL BLEND quartet was very warmly received as a unique form of vocal entertainment on the Sunshine Coast. The quartet had over 135 performances from 1990 to 1995 before retiring. The quartet competed in the 1991 and 1993 National competitions of the Australian Association of Men Barbershop Singers (now Barbershop Harmony Australia) and were judged in the very top quartets at each competition

The chorus progressively grew in numbers and competed in almost all of the Australian National and Sunshine Regional barbershop harmony chorus competitions over the succeeding years. In the 1995 National Competition, held in Canberra, the Sunshine Statesmen were judged the AUSTRALIAN SMALL CHORUS CHAMPION.

The Statesmen in 1994 organized the first Australian Barbershop Harmony College here on the Sunshine Coast when Mell was president of both the Sunshine Statesmen and the Australian Association of Men Barbershop Singers. The chorus has in succeeding years hosted several Sunshine Region Conventions/Competitions bringing together all of the choruses and quartets in the Region.

The Sunshine Statesmen have been in demand as entertainers and have sung at many venues on the Sunshine Coast over the years averaging about  15-20 singouts each year. These included performances such as citizen ceremonies, Australia Day parades, professional gatherings, retirement village and care home concerts.

The Sunshine Statesmen Barbershop Chorus has presented an Annual Concert every year since 1991 to entertain the general public. These have traditionally been held at the Buderim War Memorial Hall. On October 25, 2015, the SUNSHINE STATESMEN BARBERSHOP HARMONY CHORUS celebrated their 25th anniversary with a grand Annual Concert and Dr. Mell McMichael, at age 86, was still singing with the Sunshine Statesmen Chorus. The TROPICAL BLEND QUARTET,  Mike Ivess, Mell McMichael, Ray Mirabito and Michael Bloyce were invited, and arrived from the far reaches of Australia, to open this special 25th Anniversary Concert. They performed the songs the quartet sang in the first Australian National Barbershop Harmony Convention and Competition in 1991—THAT OLD QUARTET OF MINE and FROM THE FIRST HELLO.